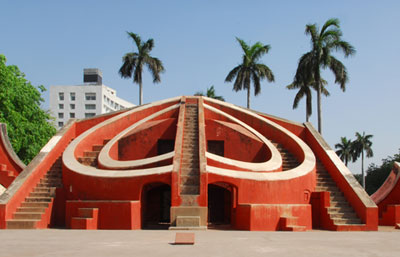 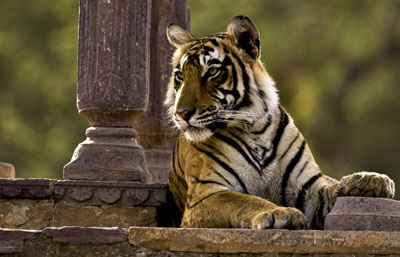 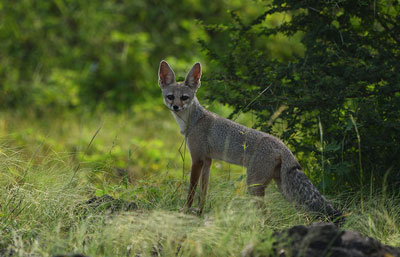 Ranthambore National Park is in Sawai Madhopur District of Rajasthan state. Located at the junction of the Aravalli & Vindhya hill range, this is one of the finest places to view animals, especially as they are used to being stared at here. The park covers an area of Approximately 400 sq Km & if combined it with the area of Sawaiman Singh sanctuary area, it is around 500 Sq km. Ranthambore is dotted with structures that reminds of bygone eras. There are many water bodies located all over the park, which provide perfect relief during the extremely hot summer months for the forest inhabitants. A huge fort, after which the park is named, towers over the park atop a hill. There are many ruins of bygone eras scattered all over the jungle, which give it a unique, wonderful & mixed flavor of nature, history & wildlife. Tigers at Ranthambore have been known to even hunt in full view of human visitors. These tigers are famous for being seen in the daytime too, due to their lack of fear of human presence in vehicles. This lack of fear of humans is excellent for tourists, as they get to see the tigers often. This National park is a wildlife enthusiast & photographer's dream. It offers excellent accommodation & internal transportation facilities. The park remains open every year from October to May. Famous for the exciting & frequent tiger sightings captured dramatically in several books, this park is today affected by ecological pressures & poaching In Nutshell, Ranthambore National park is a wildlife enthusiast & photographer's dream. It offers excellent accommodation & internal transportation facilities.

Your flight will land at Delhi International Airport sharp in the morning after which you will be transferred to the hotel. The first day you will be exploring the historical walled city of Delhi. the sightseeing tour of Delhi will include the venues like Qutab Minar, Humayunâ€™s Tomb, India Gate, President House, Parliament, Red Fort, and Jama Masjid. In the evening you will roaming through the shopping streets in Cannaught place, where you will have the opportunity to buy number of handicraft items brought from all over country.
Overnight Hotel - Delhi (B)

After the sightseeing tour in Delhi is over we will drive to Jaipur on the 2nd day of the tour. With its rich & colorful past, resplendent with tales of valour & bravery, it is now one of the most important heritage cities in India. The city was founded in the year 1728 by Maharaja Sawai Jai Singh II, the ruler of Amber. It remains the only city in the world symbolizing the nine divisions of the universe, through nine rectangular sectors.

Optional - Chokhi Dhani
Apart from this you have another option. WE have planned an evening excursion to Chokhi Dhani complex, ethnic village Resort located at a distance of 15 km from Jaipur. Rajasthani village atmosphere is recreated on the sprawling ground & includes the entertainment by folk dancers & musicians. Later drive back to hotel.
Overnight Hotel - Jaipur (B)

Full Day Tour
We have fixed the 3rd day of the tour for the sightseeing tour to Jaipur. Foremost on our excursion trip comes the famous Amber Fort, the palace complex which stands to this date was commenced under the reign of Raja Man Singh. We take an Elephant ride to reach the Fort situated on the hill, an overwhelming experience.

As we finishes with the Amber Fort we proceed to the City Palace, a perfect blend of Rajasthani & Mughal architecture. The center of the palace is a seven-storied building called Chandra Palace, with fine views over the gardens & the city. Further we visit Jantar Mantar (Solar Observatory), an astronomical treasure house, with solar devices that give accurate predictions till date. We also visit Hawa Mahal (Palace of Winds), a five-storied structure of pink sandstone. It was built in the year 1799 so that veiled royal women could peer down the busy street market unseen by the world through its 593 stone Jharokas (mini windows).
Overnight Hotel - Jaipur (B)

The more adventure set forth on the 4th day of the tour when you will reach the famous Ranthambore National Park, bounded to the north by Banas River & to the Chambal River in the south. It is named after historic Ranthambore fortress, which lies within the park. The Park was established as Sawai Madhopur Game Sanctuary in the year 1955 by the Indian Government & was declared as Project Tiger reserves in the year 1973. It became National Park in the year 1980 & later in the year 1991 the tiger reserve was enlarged to include Sawai Man Singh & Keladevi sanctuaries, total area 1334 km.

It is famous for its tiger population & is one of India's Project Tiger reserves. Other Major wild animals found in the national park include the tiger, leopard, Nilgai, dholes, wild pig, Sambar, chital & the gaur. It is also home to wide variety of trees, plants, birds & reptiles.

In the Evening, we take a Jeep safari to try luck in spotting the Tigers
Overnight Wildlife Resort - Ranthambore (B, D)

On the 5th day too we continue with the wildlife safari at the Ranthambore National Park. We will get up early in the morning and start with the Jeep Safari to the Tiger Reserve, since becoming one of the original areas under Project, the park has recovered much of its natural beauty & dry deciduous forest has been restored.

In the later half of the day we will visit the Ranthambore Fort, founded in the year 944 by the Chauhan Rajputs. After the defeat of the Chauhan king Prithviraj III by Muhammad of Ghori in the year 1192. It led by Govinda Raja, grandson of Prithviraj became the center of Chauhan resistance to the expanding Sultanate of Delhi. Later after many battles & rulers, it came in hands of Mughals Emperor Akbar in the year 1559. The fortress passed to the Kachhawa Maharajas of Jaipur in the 17th century & it remained part of Jaipur state until Indian Independence. The area surrounding the fortress became a hunting ground for the Maharajas of Jaipur.
Overnight Wildlife Resort – Ranthambore (B, L, D)

Sharp in the next morning, we will be visiting the Bharatpur Wildlife Sanctuary, founded by Maharaja Suraj Mal in the year 1733. It was once an impregnable, well-fortified city, & the capital of a kingdom ruled by Jat maharajas. The trio of Bharatpur, Deeg & Dholpur has played an important part in the Jat history of Rajasthan.

Sanctuary was previously known as Bharatpur bird Sanctuary & now known as Keoladeo National Park. The name Keoladeo is derived from the name of an ancient Hindu temple devoted to Lord Shiva in the sanctuary's central zone while the Hindi term 'Ghana' implies dense, thick areas of forest cover. This is a magnificent park having one of the World's greatest & most important heronries. It is situated at the confluence of Ghambhir & Banganga Rivers in Bharatpur district. Now a World Heritage site by UNESCO, this former duck-hunting reserve of the Maharajas is one of the major wintering areas for large numbers of aquatic birds from Afghanistan, Siberia & Turkmenistan. Some 364 species of birds, including the rare Siberian Crane, have been recorded in the park.
Overnight Wildlife Resort - Bharatpur (B, L, D)

After breakfast we will drive to Agra, en route we will visit Fatehpur Sikri (Ghost Capital), the political capital of India's Mughal Empire under Akbar's reign, from the year 1571 until 1585, when it was abandoned, ostensibly due to lack of water. We visit Emperor Akbar's Residential complex, Mosque & Tomb of Salim Chisti.

Further we continue our drive to Agra, beautifully situated on the banks of river Yamuna. It achieved prominence as the capital of the Mughals Emperors from the year 1526 to 1628, remains major tourist destination because of its many splendid Mughal-era monuments, most notably the Taj Mahal, Agra Fort & Fatehpur Sikri, all three are UNESCO World Heritage sites.


We visit Taj Mahal, symbol of eternal love, which stands on the banks of River Yamuna. It was built by the 5th Mughals Emperor, Shah Jahan in the year 1631 in memory of his wife, Mumtaz Mahal. It was completed in 22 years. Further we visit Agra Fort, taken over from the Lodhis by the Mughals Emperor Akbar in the late 16th century. The Fort can be more accurately described as a walled palatial city. It was built from red sandstone, often inlaid with white marble & intricate decorations.
Overnight Hotel - Agra (B)

Half Day Tour
Today is the last day of our tour. After breakfast we will continue with the sightseeing tour in Agra. We will also visit Sikandra, Akbar's tomb. His son Jahangir completed the construction of the tomb in the year 1613.

Further we continue our drive to Delhi, In New Delhi, we visit Raj Ghat, memorial to the Father of the Nation, Mahatma Gandhi. It is a simple black marble platform that marks the spot of his cremation on 31 January 1948. Further we drive past India Gate, memorial built in the year 1931 to commemorate the Indian soldiers who died in the World War I & the Afghan Wars. The names of the soldiers who died in these wars are inscribed on the walls. President's House, the official residence of the President of India, built in the year 1931. Until 1950 it was known as Viceroy's House & served as the residence of the Governor-General of British India. We will also visit Humayun's Tomb, memorial of Mughal Emperor Humayun, built in the year 1562. The complex is a World Heritage Site & the first example of this type of Mughal architecture in India. Qutub Minar, built in the year 1206 by Qutub-ud-din Aibek. It is the tallest (72m) brick minaret in the world, an important example of Indo-Islamic Architecture. Qutub Minar & its monuments are listed as a UNESCO World Heritage Site.


Our tour concludes : Caper thanks you for your patronage & look forward serve you again in near future