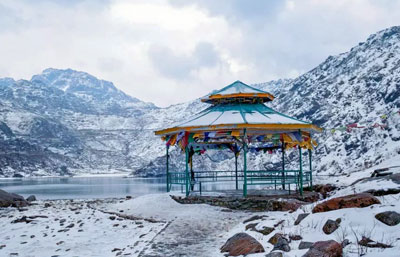 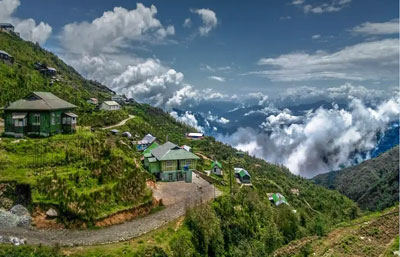 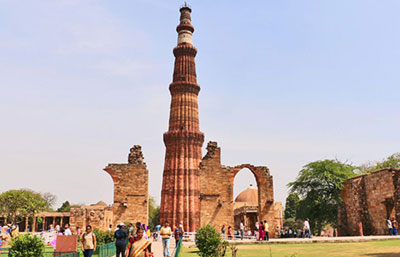 Today we will take Flight to Bagdogara & drive to Darjeeling, Queen of India's hill stations. Its setting is one of incomparable beauty. A Victorian town of old world charm 'discovered' by the British. It is surrounded by fragrant tea gardens which seem to flow over the layered slopes like emerald swells on a rough sea.
Overnight Hotel - Darjeeling (B, D)

Today we take an excursion tour to Tsongo Lake, considered extremely sacred by the local people. The place is a paradise for bird lovers with large number of Blue Whistling Thrush, Redstarts & Fork tails around. It hosts a number of migratory birds prominent among which is the Brahminy ducks. The word Tsongo in Bhutia language means source of the lake. Next we visit Do Drul Chorten, are two exquisite Stupas, the Dul-dul-Chorten, was built to commemorate the victory of good over evil. The Jhang Club Chorten wasbuilt to perpetuate the memory of a great spiritualist of today. Thrul-Shik Rinpoche an ardent devotee of Buddha & one of his best interpreters died in 1962, the stupa immortalizes Rinpoche in the land of his birth. Next we visit Rumtek Monastery, meandering roads through emerald green rice terraces, lays Rumtek, the main monastery of Kagyud or 'Black Hat' sect of Tibetan Buddhism. Built in 1959 by His Holiness the 16th Reincarnated Gyalwa Karmapa, it is a replica of Tsurphu Monastery from the Kham region of Tibet.

Today we take an excursion to Phodang, original monastery has been rebuilt & like Ralong & Rurntek the main annual Puja is performed here on the 28th & 29th days of the tenth month of the lunar calendar with religious dances being the main attraction.
Overnight Hotel - Gangtok (B, D)

Today we drive to Rumtek, also called the Dharmachakra Centre, is a Tibetan Buddhist monastery Originally built by the 9th Karmapa Wangchuk Dorje in the year 1740. It served as the main seat of the Karma Kagyu lineage in Sikkim. But when the 16th Karmapa arrived in Sikkim in 1959, after fleeing before the Chinese occupation of Tibet, it was in ruins. Despite being offered other sites, the Karmapa decided to rebuild Rumtek. To him, the site possessed many auspicious qualities & was surrounded by the most favorable attributes. For example Flowing streams, mountains behind, a snow range in front, & a river below.
Overnight Hotel - Rumtek (B, D)

Today we drive to Kalimpong, an incredible stunning backdrop of towering snow capped peaks. This exotic town of beautiful people, mystical & enchanting, with a rare ethnic blend of hill people. It also houses several Buddhist monasteries which hold a number of rare Tibetan Buddhist scriptures. It was ruled by Bhutan for 155 years & was annexed by the British only in 1865, after which it flourished as a centre of wool trade with Tibet. Here Buddhism rubs shoulders with Hinduism & Christianity. Gumpas, unusual churches, temples & missionaries coexist in a jovial society.
Overnight Hotel - Kalimpong (B, D)

Today we visit Thongsa Gompa also known as the Bhutanese Monastery. It is the oldest monastery in Kalimpong & was founded in the year 1692. Though the old structure was destroyed by the Gorkhas, it was rebuilt on the same site. Next visit the Zong Dog Palri Fo-Brang Gompa, which is on the Durpin hill & is famous for the Tibetan wall paintings. It also has a religious debating society along with a school of Tibetan medicine.

Later we visit Tharpa Choeling Monastery founded in 1937 & belongs to the Gelugpa (yellow hat) sect of Tibetan monastery. This Monastery houses many old scriptures & literary works. Next Dr Graham's Home, mission school was founded by Scottish missionary Dr. John Anderson Graham in 1900. The purpose of the school was to educate children of the tea garden workers & poor labourers. We also visit few nurseries around town.
Overnight Hotel - Kalimpong (B, D)

Today we drive to Bagdogara to take a fight for Delhi. This is a wonderful drive & initially you follow the turbulent Teesta. After arrival our representative would assist you at the airport & take you to hotel for check in.
Overnight Hotel - Delhi (B)

Full day tour Today we take a guided tour of Old Delhi, the 17th century walled city of Shah Jehanabad, Visiting the great Jama Masjid, the principal mosque of Old Delhi. Built in the year 1656 AD by the Mughal Emperor Shah Jahan, it is the largest & best known mosque in India. Later we walk down through Chandi Chowk, the old marketplace of Shah Jahanabad now a picturesque bazaar to reach Red Fort, built in the year 1648 by Shah Jehan. In New Delhi, we visit Raj Ghat, memorial to the Father of the Nation, Mahatma Gandhi. It is a simple black marble platform that marks the spot of his cremation on 31 January 1948. Further we drive past India Gate, memorial built in the year 1931 to commemorate the Indian soldiers who died in the World War I & the Afghan Wars. The names of the soldiers who died in these wars are inscribed on the walls. President's House, the official residence of the President of India, built in 1931. Until 1950 it was known as Viceroy's House & served as the residence of the Governor-General of British India. We will also visit Humayun's Tomb, memorial of Mughal Emperor Humayun, built in the year 1562. The complex is a World Heritage Site & the first example of this type of Mughal architecture in India. Qutub Minar, built in the year 1206 by Qutub-ud-din Aybak. It is the tallest (72m) brick minaret in the world, an important example of Indo-Islamic Architecture. Qutub Minar & its monuments are listed as a UNESCO World Heritage Site.
Overnight Hotel - Delhi (B)

Today we time transfer to the airport to board the flight for onward journey with memories of India Trip.

Our tour concludes: We thank you for your patronage & look forward serve you again in near future.