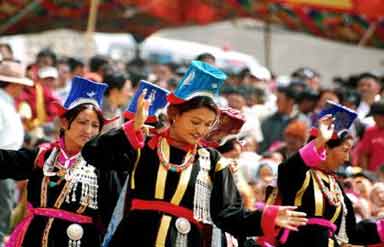 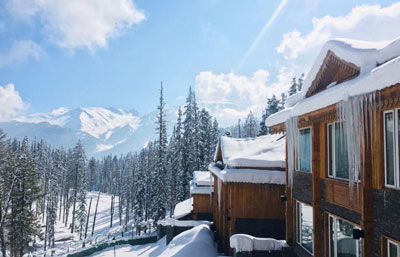 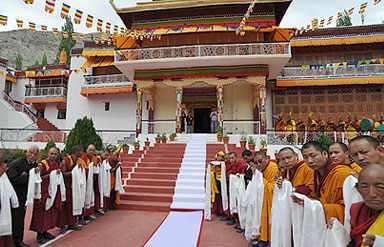 Morning transfer to Delhi airport to board flight for Leh. Arrive Leh receive upon arrival and drive to hotel. Afternoon at leisure in Leh, where we can take a walk to the colorful bazaar.
Overnight Hotel - Leh.

After breakfast we leave on a full day tour of the monasteries around Leh and visit  Shankar, Spituk and Phyang monasteries. Later in the afternoon we walk around Leh town and visit Leh Market, Leh Palace ruins, Leh Gompa & Shanti Stupa.
Overnight Hotel ? Leh.

Today we proceed for Indus Valley monastery tour. We start with a visit to Shey the ancient capital of Ladakh. The monastery here has a huge gold-gilded statue of Buddha Sakyamuni with a large silver lamp burning in front of the statue.

Later in the evening we drive back to hotel. Dinner and overnight at the hotel.
Overnight Hotel - Leh

From Likir we drive 9 km to   Basgo. It was an important centre in the old days, having been the capital of lower Ladakh when the kingdom was divided in the 15th & 16th centuries. We visit the ruins of the Royal Palace at Basgo, Ser Zung Temple, which is known for its great frescoes and finally the temple with an enormous gold and copper statue of the Maitreya Buddha. Later we drive to Leh (3521 m), capital of Ladakh and check-in the Hotel. Evening at leisure.
Overnight Hotel - Leh.

After breakfast take a full day excursion to Khardongla pass, highest motorable pass in the 5602Mtrs & been recorded in Guinness Book of World Records. At the top enjoy the nature beauty of snow capped mountain. In the evening drive back to the Leh.
Overnight Hotel - Leh (B, L, D)

Leave early morning with packed breakfast & lunch to Pangong Lake, Ascend Changla Pass (5486 m), enjoy the beautiful panoramic view of the villages below the Pass. After crossing the Pass we reach Tsoltak, known for its yaks. Arrive Durbuk, from there a short drive to the western shore of the Pangong lake. Enjoy the landscape in the backdrop of the Lake. This famous blue & brackish Lake is 5-6 Km wide & over 144 Km long with 2/3rd of it running the other side of INDO-TIBETAN BORDER & 1/3rd in India. One rarely feels so close to nature & the scenery is unforgettable. Late afternoon drive back to Leh.
Overnight Hotel - Leh (B, L, D)

After breakfast proceed for Indus Valley monastery tour. Start with a visit to Shey, the ancient capital of Ladakh. The monastery here has a huge gold-gilded statue of Buddha, with a large silver lamp burning in front of the statue. Then visit Thiksey Monastery (Gompa), an impressive complex rising tier upon tier on a hill above the village. The monastery has a beautiful 30 m high gold-plated statue of Maitreya Buddha, the Buddha of the future. Drive further to visit the famous Hemis Gompa, founded in the year 1630 by Stag-tsang-ras-pa under the royal patronage of Sengge Namgyal. Hemis is one of the largest & richest monasteries of Ladakh. Later visit the Stok Palace, the Royal residence of the King of Stok & the Museum that has a rich collection of Ancient Ladakhi artefacts including old Thangkas, precious stones, arms & armoury, the Queen's necklace & crown of the King of Ladakh among others.

The two-day festival of monastic dance in July/August has raised the reputation of Hemis particularly high. The festival is dedicated to Guru Padmasambhava, popularly known as second Buddha & responsible for spreading Buddhism in the Tibetan world.
Overnight Hotel - Leh (B, L D)