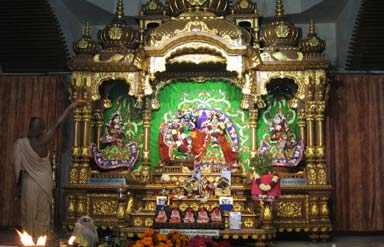 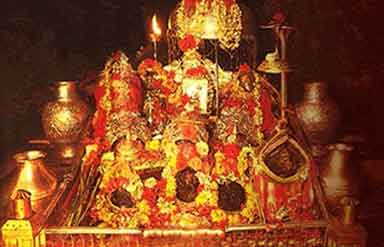 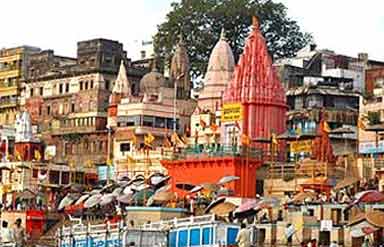 India is covered with holy sites associated with the exploits of the gods, the waters of sacred rivers or the presence of holy men. Million of people reach these holy pilgrimage centers of worship. Temple Tour in India will also ake us to some of the best temples of India. Temple Tour in India will commence from the capital city of Delhi renowned for its religious shrines. Further it will take us to Jaipur, Agra, Mathura, Vrindavan, Rishikesh, Haridwar and Varanasi. Varanasi is the oldest living city of India and forms an integral part of the temple tours in India.

Breakfast at the Coffee shop. Rest of the morning at leisure. You will be taken on a guided tour of Delhi, beginning with a morning sightseeing trip to Old Delhi and followed by visits to the 1648 Red Fort, India's largest mosque - Jama Masjid and Gandhi Memorial at Raj Ghat. Afternoon tour includes visit to India Gate, President's House, Humayun's Tomb, Lotus Temple and Qutab Minar. Overnight stay at hotel.

Today we drive to the Pink City, Jaipur. This city owes its name, foundations and careful planning to the great warrior and astronomer, Maharaja Sawai Jai Singh II. Jaipur is the capital of Rajasthan and famous for its handicrafts and precious and semiprecious stones. In the afternoon we visit the City Palace that is still the formal residence of the royal family, built in a blend of the Rajasthani and Mughal architecture. In the museum of the City Palace we visit the private collection of the Jaipur Maharajas. We continue to Jantar Mantar, a stone observatory, and the largest of Jai Singh's five remarkable observatories. Its complex instruments reveal us the secrets of medieval Indian astronomy.

After breakfast we drive to Amber, 11 km. away from Jaipur. Amber was the ancient capital of Kachhawaha dynasty for 6 centuries before it was moved to newly created Jaipur. We will ascend to the Palace Fortress on the back of an Elephant. Enroute to Amber we visit the Hawa Mahal (Palace of the Winds), built in 1799 AD, it contains 953 small casements with each having its own balcony. The windows enabled cool air to circulate and the ladies to watch processions below without being seen. In the afternoon we have a walk through the Colourful Bazaars of Jaipur and visit a factory to see the famous block printing work being done since centuries in Jaipur. In the evening we drive through the new city of Jaipur and visit "Laxmi Narayan Mandir", a Hindu temple made out of white marble. We might have an opportunity here to observe a prayer ceremony.

Today we leave Rajasthan, the biggest state in India and drive through a series of fields, small towns and villages to Agra. Enroute we make a stop and visit Fatehpur Sikri, which was once an imperial capital frozen in time, constructed by Akbar the Great in the 16th century. This wonderful city constructed by red sand stones was abandoned as abruptly as it had been built. It has been generally stated that it was due to failing in the water supply. In the evening arrive in Agra. Evening free for leisure.

Today we start our sightseeing by a visit to the Agra Fort, built by three of the greatest Mughal emperors. The construction of this massive structure began in 1565 under Akbar's reign and continued till the time of his grandson's reign, Shah Jahan who built the impressive imperial quarters and mosque. After the visit of Agra Fort we proceed to visit the most beautiful monument of India, the Taj Mahal, an enduring monument to love, with a continually fulfilling beauty. It was built by the Mughal Emperor Shah Jahan between 1631-52, as a tomb and memorial to his beloved wife Mumtaz Mahal (Jewel of the Palace), who died at the age of 39 giving birth to her 14th child. We spend enough time at Taj Mahal to take this impressive memory home. After the visit of Taj Mahal we have a look at the famous fine marble inlay work that is still being done in Agra by the descendants of the families of builders and artists of the Taj Mahal.

In the morning after having breakfast we drive to Mathura. Arrive in Mathura by the afternoon. Mathura is a very important religious city of Uttar Pradesh. It is the epicenter of Brajbhoomi, the land of Lord Krishna and lies on the banks of the Yamuna River. Mathura derives its glory & sacred character from being the birth place of Lord Krishna. Through centuries, it has attracted pilgrims from the Hindu, Buddhist and Jains. Arrive in Mathura by the afternoon. In the evening we have sightseeing in Mathura. The main place to visit in Mathura is the Dwarkadhish Temple dedicated to Lord Krishna built by Seth Gokul Dass of Gwalior in 1814. Another temple is the Krishna Janma Bhoomi Temple. This temple is built inside an ancient prison believed to be the birthplace of Lord Krishna. The Yamuna River and its ghats (banks) form the focus of pilgrims in Mathura. The Ghat is dotted with multiple temples and shrines.

In the morning, after having our breakfast we drive to New Delhi. Enroute we will stop at Vrindavan. Vrindavan is around 15 km from Mathura. It is another major place of pilgrimage. It is the town of 4,000 temples where the sounds of celebrations for Lord Krishna is constantly resounded. In Vrindavan we will visit Madan Mohan Temple. This temple is located near the Kali Ghat and is the oldest existent temple in Vrindavan today. This temple is closely associated with the Saint Chaitanya. Another temple that we will visit is the Banke-Bihari Temple. This temple was built in the year 1864. It is the most popular shrine at Vrindavan. After we visit this temple we will drive to New Delhi. Arrive in New Delhi in the evening. Evening free for leisure.

In the morning drive to Rishikesh. Rishikesh represents the gateway to the Himalayas in the Tehri- Garhwal region of Uttaranchal. It is believed that several yogis and sages lived and practiced penance here. Rishikesh represents the site where Vishnu vanquished the demon Madhu. It abounds in natural splendour. The spectacle of the River Ganges rushing through the Himalayan foothills is an awesome sight. The freshness of the air, the sound of flowing water, the scenic beauty of the region and the distant sound of bell chimes create an unforgettable experience for those that visit this pilgrimage town. We will arrive in Rishikesh by the afternoon. In the evening we will visit various temples, the Laxman Jhoola - the swinging Bridge and ashrams along the banks of River Ganges.

In the morning, we will drive to Haridwar. Haridwar is the gateway to the four pilgrimages in the Uttaranchal and is located on the foothills of Shivaliks on the banks of River Ganges. The River Ganges leaves the mountains and enters the plains with Haridwar being the first major town on the plains. Though the Ganges does not lose its rapids completely nevertheless it becomes very quite and calm here. The city acquires a unique charm in the evening when the ghats become breathtakingly beautiful with thousands of Diyas and Marigold floating in the waters of Ganges. We visit various places like Mansa Devi temple, Sapt Rishi, Daksha Mahadev temple etc. In the evening we will visit Har Ki Pauri. In the evening a Maha Aarti is performed here. It is an event which is a must, not be missed by any visitor.

In the morning we leave for Varanasi. Varanasi is without doubt India's most sacred city and thus visited by over one million people. Varanasi is also called the city of light - Kashi or Benaras. Buddha visited this city in 500 BC. Varanasi is regarded as one of the oldest and the holiest city. According to the Indian chronicles, Varanasi was established as a city around twelve hundred years ago before the Christian era.

In the early morning we take boat - ride on the holy river Ganges and enjoy sunrise on the boat. Ghats (flight of steps) and the activities of pilgrims on that are the principal attraction for visitors to Varanasi. Thousands of pilgrims and devotees visit this city to make holy prayers, to meditate and to purify themselves through taking a bath in the holy river Ganges. In the noon we visit the city of Varanasi. Then we will drive to Sarnath. Sarnath is the place where Buddha delivered his first sermon at deer park. Afterwards we will return to Varanasi.

In the afternoon we drive to the airport for a flight from Varanasi to New Delhi. In New Delhi we have rest of the day at leisure. Rooms are available to get fresh and change before we depart to the airport with our representative.

Tour concludes: Caper thanks you for your patronage and ensures a punctual transfer to the Railway Station / Airport for your onward travel.