Nepal
The Land of Lord Buddha 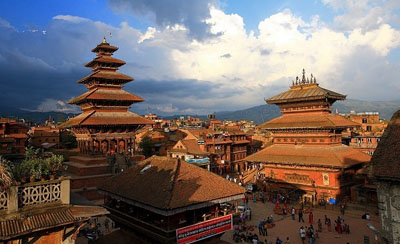 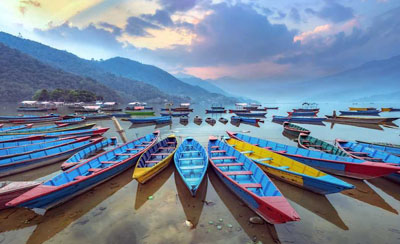 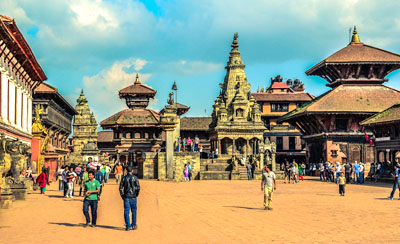 Have you ever visited a land which promises a breathtaking view of Mount Everest, along with being entwined in mystery and diversity? If not, then the mystical legends of Nepal are calling you, teeming with the ?anything can happen? ambiance.

And of course, it can.

Nestled in the Himalayas, Nepal is a hotspot for adventure lovers, pilgrimages and origin of Buddhism. Called as the only Hindu Kingdom in the world, it is famous for icy glaciers, artistic monuments, diverse culture and exotic wildlife sanctuaries.

While on a Nepal Travel, explore the Kathmandu Valley for its historic temples. Know why it is being called the political and cultural heart of the country. Experience the nostalgic past of reign of Mallas with the spell binding architecture, culture and lip smacking cuisines.

Nepal also has the world?s best trekking tours, specially in the Annapurna Region. Nowhere else in the world you get to experience the windiest, driest and wettest destinations, all in one go. The ?Monument Zones? include the oldest Buddhist majestic monuments, dating back to 3rd century.

With 7 of the world?s highest mountains enveloping Nepal, this country offers you a surreal, larger than life experience. It is also a paradise for bird watchers. The multitude adventure options in Nepal include wildlife safaris, trekking, rafting, hot air balloons, bungee jumping, paragliding and ultra-light aviation.

UNESCO world heritage sites further add to the charm of Nepal Tour. Soak in the old world culture with innumerable monasteries, temples and inns in this land locked country.


The spiritual and ethereal importance of lakes in Nepal cannot be penned down in words. With more than 200 lakes flaunting their glacier origin, you will definitely not miss the sea. It is also the home for more than 35 different cultures, adding innumerable languages, traditions, customs and cuisines in its repertoire.

For spiritual seekers, nothing offers a sacred embrace like Nepal. Get lost in the tranquility and peace of this platonic destination, teeming with every possible encounter with serenity and pious ambiance.


Some of the Popular Nepal Tourist Attractions 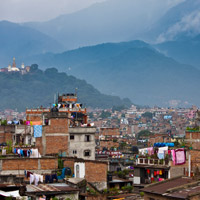 This capital city is intoxicating backpacker?s delight. Do get lost in the timeless artistic and cultural heritage of the city with a casual stroll through the backstreets. Explore the hidden temples, courtyards of rice and drying chilies and hobbit shaped workshops. The Durbar Square in Kathmandu is the spiritual beating heart. Surrounded with majestic buildings and unique temples, it endows an out-of-this-world experience.

Do visit the living Goddess Kumari?s Temple and proceed towards exploring Swayambhunath Stupa, world famous for housing the eyes of Lord Buddha. Budhanil Kantha tops the list of Nepal Travel Guide, for revealing the majestic reclining statue of Lord Vishnu as Narayan.

One of the royal cities of Kathmandu Valley, Patan is teeming with metal statues, stone and wood carvings, Hindu and Buddhist temples and more than 1000 monuments. The rich tradition of handicrafts and artifacts would simply enthrall you.

It is known the ?City of Beauty? and is the third largest city of Nepal. Originally called as ?Lalitpur?, it is the hotspot for purchasing unique Buddha statues, traditional masks, fine metal work and jewels.

Fondly called as the ?Place of devotees? Bhaktapur has magically preserved the medieval character of Nepal. It is famous for the finest religious architecture in the country.

Red brick houses, cobblestone streets, wells, cisterns, statues and temples add to its charm. The main travel attractions in Bhaktapur include Palace of 55 windows, the golden Door and Pagoda Nyatapola.

You can easily spot artisans weaving chisel timber and clothes by the road side, adding to the feel of the city. No destination reveals the rich tapestry of Nepali life like Bhaktapur does. 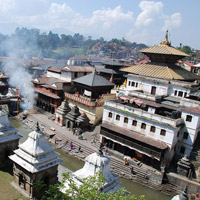 The temple city of Pashupatinath is known for revered Hindu shrines and temples. Preserving the ancient temples devoted to Lord Shiva, it is included in the world heritage list of UNESCO.

Also called as Boudhanath, it is a world famous stupa in Kathmandu. It is one of the largest spherical stupas in Nepal. 108 images of Buddha are embellished in the octagonal base of the stupa.

For the past 2000 years, Buddhist lamas have been praying around the stupa, which also is one of the most visited tourist destinations in Nepal.

Dedicated to Goddess Kali, this temple is known for animal sacrifices. The best time to see the traditional rituals of this temple is during Dashain festival, which goes on for 15 days. One of the longest festivals in Nepal, it is celebrated in the month of September- October.

The traditional Nepalese clothing includes woollen goods made of yak and sheep wool. You can also get fine fabric made of silk and cashmere. The metal singing bowls that produce low pitched sound is definitely a must buy. Other handicraft items include prayer wheels, metal trinkets and pottery articles. Major shopping destinations in Nepal are Thamel, King?s Way, New Road, Civil Mall and Bhatbhateni Super Market. 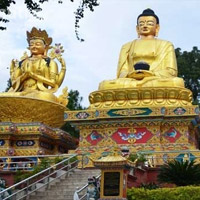 The cultural heritage of Nepal can be felt by participating in its festivals. The main festivals include Maha Shivaratri (February/March) Buddha Jayanti (May/June), Ghanta Karna Chaturdasi (August), Dashain (October) and Tihar (October/November).

The best time to visit Nepal is in between September to late November. The two main festivals of Nepal- Dashain and Tihar also fall in these two months only.

The Kathmandu?s Tribhuvan International Airport is connected with several international flights. One can also enter Nepal through India by roadways. The famous entry points between India and Nepal include Biratnagar and Birgunj (Bihar), Kakkarbhitta (West Bengal) and Mahendranagar, Dhanagadi and Nepalgunj (Uttar Pradesh). 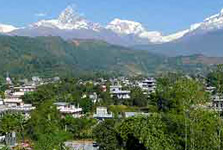