The Temples and Ruins of Medieval South India 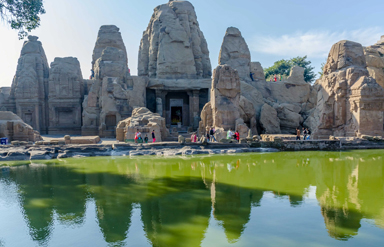 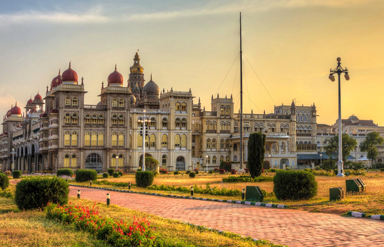 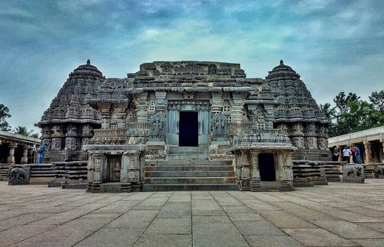 Arrive Mumbai by international flight, after a traditional 'Swagat' (Welcome) our representative would assist you at the airport & transfer to hotel for check-in. Mumbai is an archipelago of seven islands. Artifacts found that these islands had been inhabited since the Stone Age & documented evidence of human habitation dates back to 250 BC. In the 3rd century BC, the islands formed part of the Maurya Empire. In 1534, Portuguese appropriated islands from king of Gujarat later ceded to Charles II of England in 1661, as dowry for Catherine de Braganza. These islands were in turn leased to the British East India Company in 1668.

First we visit Gateway of India- It was built to commemorate the visit of King George V in 1911 Later enjoy an hour's boat ride to the tranquil forested island of Elephanta, one of the most atmospheric places in Bombay. The chief attraction of the island is its unique cave temple whose Shiva sculpture is a fine example of Hindu architecture. In the afternoon visit Jehangir Art Gallery and the Prince of Wales Museum, Victoria Terminus, Hanging Gardens, Jain Temple and Mani Bhavan – Gandhi's Bombay base between 1917 & 1934, this house is now a permanent memorial to the Mahatma.

Late evening transfer to airport to board the flight for Banglore. Upon arrival transfer and check-in the hotel.
Overnight Hotel – Bangalore (B)

Today we take a guided tour of Bangalore, visiting Tipu Sultan Palace; the layout of the palace gives the idea of the ethnic Mughal lifestyle. The fort & its remains present the history of the era in which it was built. The construction of the Tipu palace was started by Haider Ali & completed by Tipu Sultan, it is now a museum. Also visit ISKCON Temple, harmonious blend of the Dravidian & modern architecture. The building has some of the modern facilities along with Vedic preaching library.

Next we visit the Lal Bagh Garden, name Lal Bagh has been given to it for the wonderfully bloomed red roses that remain blooming all through the year. Haider Ali started building this garden in 1760. We will also stop at Vidhana Saudha, a seat of state legislature - an imposing magnificent palatial building built in 'Neo –Dravidian' Style and incorporates Indo Sarascenic elements.

Later we drive to Mysore, capital city of the Wodeyars kingdom. It has always enchanted its admirers with its quaint charm, rich heritage, magnificent palaces, beautifully laid-out gardens, imposing buildings, broad avenues & sacred temples. There's an old world charm about the city that reaches out to everyone.
Overnight Hotel – Mysore (B)

Today we take a tour of Mysore, we visit Srirangapatnam, the historic capital of Tipu Sultan known for his struggle against British rule. Several monuments relating to his rule are sprinkled across the island. Later we visit Darya Daulat, commonly known as Summer Palace of Tipu Sultan is situated amidst scenic surroundings on an island formed by two branches of the River Cauvery. We also visit Maharaja Palace, designed by British architect Henry Irwin, the Amba Villas Palace as it is also known, was completed in 1912. Chamundi Hill, which is topped with a 12th century temple of Durga with the magnificent 5m tall Nandi, Carved from single piece of granite in 1659, its one of largest in India.

Today we drive to Hassan, founded in the 11th century, by Channa Krishnappa Naik, a Palegar. The place is called Hassan after the Goddess Hasanamba (the smiling Goddess) presiding deity of the town.

Later we take a tour of Chennakeshawa Temple at Belur, built in the year 1117 AD to celebrate Hoysala military victories & it took over a hundred years to complete. Stories from the Purans, Upanishads & other mythological sources have been executed in the most exquisite & authentic detail, tales from Ramayana & Mahabharata. We also visit the Hoyasaleshwara Temple at Helebid, built by Kettuvallam, during 1121 AD, dedicated to Lord Siva, having two shrines connected by pillared walls & in each shrine is a Lingam, Hoyasaleshwara & Shanthaleshwara.

Today we drive to Hospet, once a beautiful capital city of Vijaynagar empire, in ancient days was known as Nagalapura. The city was razed to the ground by Sultan of South India in the year 1565.

Today we take a day excursion to Hampli, the capital city of the Vijaynagar Empire. Founded by Harihara & Bukka in 1336, it fell to the Muslim rulers in 1565 after the disastrous Battle of Talikota, subsequently lapsed into decline & abandonment. The once proud city of victory is now a city of desolation.

We visit the Virupaksha Temple, dedicated to Lord Shiva & Pampadevi. This is the only temple that is still used for worship. The temple, with its nine-storied Gopuram & ceiling of the ranga mantapa is beautifully painted with scenes from the epics & Puranas. Later visit Vittala, a splendid 56 musical pillars complex. To the east of the hall is the famous Stone Chariot with stone wheels that actually revolve. Several of the carved pillars were attacked & a large portion of the central part has been destroyed.

We also visit Elephant stables, a beautiful example of Hindu-Muslim style of architecture, housing about 11 elephants in separate compartments. Also visit Queen's Bath, a structure with a plain exterior but stunningly ornate interiors, with gracefully arched corridors and projecting balconies. We also visit Lotus Mahal. This two-story structure has beautiful arch ways set in geometric regularity. It was an air-cooled summer palace for the queen.

Morning we drive to Badami, founded by Pulakesi I, ruler of the Chalukyas, the town is located at the foot of a rugged, red sandstone outcrop that surrounds Agastya tirtha water reservoir on three sides & is known for its rock-cut cave temples, sculpted between 6th-8th centuries AD.
En route we visit Pattadakkal & Aihole.

Pattadakkal, a World Heritage Site, has 10 major temples representing the early Chaulakya architecture. The biggest temple dedicated to Virupaksheshvara, has a huge gateway and several inscriptions.

Aihole, famous as the 'Cradle of Indian Architecture', has over a hundred temples scattered around the village. The oldest temple, the 5th century Lad Khan Temple and the Durga (Fort) Temple have a semi-circular apse and a complete portico. Amongst many other temples, the Jain Meguthi Temple and the two-storeyed Buddhist Temple are significant.

Today we take a tour of Badami. We will be visiting several temples dating from the Chalukyas' period in Badami. First set of temples is a group of four on a hill adjacent to the Bhutanatha Tank, dating back to the 5th century. In the adjacent wall there is a carving of the cosmic dance of Shiva Natarajan depicted with eighteen arms. The second temple bears images of Vishnu in his Varaha & Trivikrama incarnations. The third is a rock cut temple with inscriptions dating to 578 AD, belong to the period of Kiritivarma Chalukyas. There are carved images of the Narasimha & Trivikrama avataras of Vishnu.

Further up is a Jain rock cut temple dedicated to the Tirthankara Adinath with inscriptions dating back to the 12th century. The Mallikarjuna temple dating 11th century is on a star shaped plan.

Day 10 Badami - Hubli (130 Km / 3 Hrs)
Today we drive to Hubli, historic town was known as Raya Hubli & also as Elaya Puravada Halli during the ancient times. This city metamorphosed into an important commercial centre for trade in cotton & iron during the reign of the Vijaynagar Empire.
Overnight Hotel – Hubli (B)

Today, we drive to Goa, once a part of the Mauryan Empire in the 3rd century BC. From 580–750 AD the Chalukyas of Badami had their sway over Goa. It is also known for its world heritage architecture including the Bom Jesus Basilica. Goa also has rich flora & fauna, owing to its location on the Western Ghats range, which are classified as a biodiversity hotspot rather an absolute paradise on earth.

Today visit old Goa Churches; Basilica of Bom Jesus, built in the 16th century, dedicated to Infant Jesus, is the most popular and famous of all churches in Goa. The mortal remains of St. Francis Xavier, kept in a silver casket, are enshrined here. Sri Mangeshi Temple, surrounded by rolling green hills & dedicated to Lord Shiva, is the most important of all temples in Goa & is located at Priol in Ponda Taluka. Dona Paula, a village named after Dona Paula de Menezes, the wife of a noble man Antonio de Souto Maior, who died as a young woman in 1682. Miramar Beach, an urban beach where the Mandovi River meets the Arabian Sea, a point that offers the best location to watch enchanting sunsets.

Today we assist you with a punctual transfer to the airport for your onward journey.