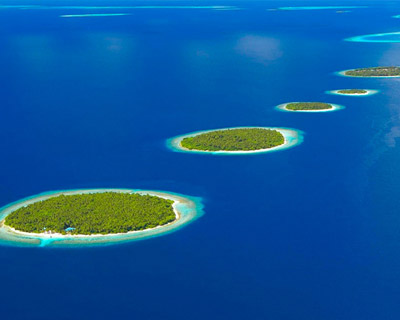 The Maldives is a long and narrow country formed by 26 natural atolls. Some atolls are in the form of a number of islands by time and in the form of isolated reefs, which could be classified as smaller atoll formations. All land above the surface in the Maldives is of coralline origin. The atolls of the Maldives form a quite regular chain and, especially in the northern and central atolls, an arrayed structure is apparent. There are broad and deep channels in between some atolls.The origin of the word atoll itself is in the language of the Maldives.

Noonu Atoll
Southern Miladhunmadulu Atoll or Noonu is an administrative division of the Maldives corresponding to the southern section of Miladhunmadulu Atoll. The capital is Manadhoo. The Channel to the west of this atoll is called Baraveli Kandu. "Baraveli" means hermit crab in local Dhivehi language. 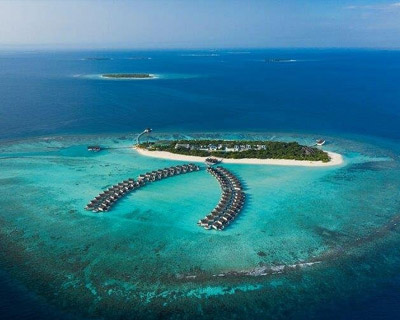 Raa Atoll
Northern Maalhosmadulu Atoll or Raa Atoll is an administrative division from the Maldives. The capital is Ungoofaaru. It includes Northern Maalhosmadulu Atoll proper and the island of Alifushi.1. Alifushi and Etthingili (Powell Islands in the Admiralty Chart) stand on a detached reef of their own with very deep waters (no sounding) between this faru and the northern end of the main atoll.

Baa Atoll
Baa Atoll is an administrative division of the Maldives. It consists of three separate natural atolls, namely southern Maalhosmadulu Atoll (which is 42 km long and 32 km wide and consists of 9 inhabited islands), the Fasdūtherē Atoll (wedged in between the two Maalhosmadulu Atolls and separated from north Maalhosmasdulu Atoll by Hani Kandu or Moresby Channel) and the smaller natural atoll known as Goifulhafehendhu Atoll (Horsburgh Atoll in the Admiralty charts).Situated on the west of the Maldives atoll chain, it consists of 75 islands of which 13 are inhabited with a population of over 11,000 people. The remaining 57 islands are uninhabited, in addition to eight islands being developed as resorts.

Lhaviyani Atoll
Lhaviyani Atoll or Faadhippolhu Atoll is an administrative division of the Maldives. The island of Maafilaafushi was resettled in the 1980s in order to relieve the lack of land availability in Malé. The island once served as the capital of the separatist Kingdom of Boduthiladhunmathi. In Mohamed Rannabadeyri Thakuru with the help of Adhi Raja of Cannanore attacked Male' and tried to overthrow the kingdom of Ibrahim Kalaafaanu (Sultan Ibrahim III 1585-1609) in However being unable to take control of the capital Male' they fled to Faadhippolhu where Mohamed Rannabadeyri controlled the northern atolls of the Maldives until he was overthrown by Sultan Muhammad Imaduddin I (1620-1648).

North Ari Atoll (Alifu Alifu Atoll)
Northern Ari Atoll or Alifu Alifu Atoll is an administrative division of the Maldives. It was created on March 1, 1984 combining northern section of Ari Atoll, the small Rasdhukuramathi Atoll, and the isolated island of Thoddoo. Many of the islands in this atoll have been inhabited since ancient times and have arqueological remains from the Maldivian Buddhist period. Rasdhu Atoll is also known as Ross Atoll in the Admiralty charts. The separation of Ari Atoll (formerly Alifu Atoll) into a Northern and a Southern section has formed the two most recent administrative divisions of the Maldives, namely Alifu Alifu Atoll and Alifu Dhaalu Atoll. The island of Maalhos is geographically the westernmost island of the Atoll (and the second most westerly inhabited island of the Maldives after Maamakunudhoo). Vajrayana Buddhist remains have been found on this island.

South Ari Atoll (Alifu Dhaalu Atoll)
The separation of Ari Atoll (formerly Alifu Atoll) on March 1, 1984, into a Northern and a Southern section formed the two most recent administrative divisions of the Maldives, namely Alifu Alifu Atoll and Alifu Dhaalu Atoll. Alifu Dhaalu Atoll lies south of the line between the channels of Himendhoo Dhekunukandu and Genburugau Kandu. There used to be a beautiful ancient mosque in Fenfushi island having wooden decorated ceilings and lacquerwork panels. Buddhist remains, including a stupa, have been found in Ariadhoo Island. 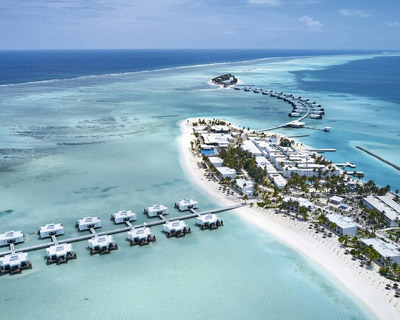 Vaavu Atoll
Vaavu Atoll is an administrative division of the Maldives comprising the natural atolls of Felidhu Atoll and the Vattaru Reef. It is the smallest administrative atoll in terms of population. This atoll is located 40 miles from capital Malé, 90 minutes by speedboat and 5 hours by dhoni. The Vaavu Atoll administrative division includes two geographical atolls; Felidhu Atoll and the small egg-shaped Vattaru Reef, which has only one little islet, Vattaru and is 9 kilometers in diameter. The easternmost geographical point of the Maldives is located at Fottheyo Muli, close to Foththeyo-bodufushi Island.

Meemmu Atoll
Mulaku Atoll or Meemu Atoll is an administrative division of the Maldives. It corresponds to the natural atoll of the same name, also known as Mulak Atoll or 'Mulakatolhu'. There is a mosque of historical value in Kolhufushi Island, but no Buddhist remains have been found on this atoll. Also of historic importance is the 1573 wreck of Kalhuohfummi off the south eastern reef of Kolhuvaariyaafushi island.

Faafu Atoll
Northern Nilandhe Atoll, Nilande Atoll North or Faafu Atoll is an administrative division of the Maldives.It corresponds to the natural atoll of the same name.Certain islands of this atoll used to be inhabited, like Himithi. The islanders were resettled in other islands so that Friday prayers could be held.

Dhaalu Atoll
Southern Nilandhe Atoll, Nilande Atoll South or Dhaalu' Atoll is one of the atolls of the Maldives. It corresponds to the natural atoll of the same name.It stretches 23km (14 mi) from east to west, and 38km (24 mi) north to south. Out of a total of 56 islands, seven of the islands are inhabited, with a total population of around 6694. The capital island is Kudahuvadhoo, located at the atoll's southern tip.

Thaa Atoll
Kolhumadulu Atoll, letter code Thaa is an administrative division of the Maldives. It corresponds to the natural atoll of the same name. The ancient name of the island was Kolhumaduva during the time of King Koimala who united all atolls of the Maldives under one Kingdom for the first time.

Lamuu Atoll
Haddhunmathi Atoll or Laamu Atoll is an administrative division of the Maldives. It corresponds to the natural atoll of the same name. The administrative capital is located in Fonadhoo Island.It is mostly rimmed by barrier reefs, the broadest of which are topped by islands. There are many islands along its eastern and southern boundaries. This atoll is quite regular excepting for the projection of the reef at its NE corner (Isdhū Muli). It closely resembles Kolhumadulhu, its neighbour further north. Owing to its typical atoll shape, it differs in no respect from atolls in the Pacific Ocean, save for its greater size. Its reefs are generally of little breadth, with no signs of vilu (deep pools), except for its eastern fringes which are covered with islands that are quite large by Maldive standards.

Gaafu Dhaalu Atoll (Southern Huvadhu Atoll)
Southern Huvadhu Atoll or Gaafu Dhaalu is an administrative district of the Maldives formed by the southwestern section of Huvadhu Atoll. It was created on February 8, 1962 when Huvadhu Atoll was divided into two districts. Gaafu Dhaalu corresponds to the Southwestern section of this large natural atoll, south of the line extending between the channels of Footukandu and Vaarulu Kandu. The capital of this region is Thinadhoo (formerly known as Havaru Thinadhu). There are 153 islands in this district, 10 of which are inhabited. This district is located about 340 kilometres south of the capital Malé. Independent travellers to Gaafu Dhaalu Atoll require special permission to leave the tourist zone and visit inhabited islands. 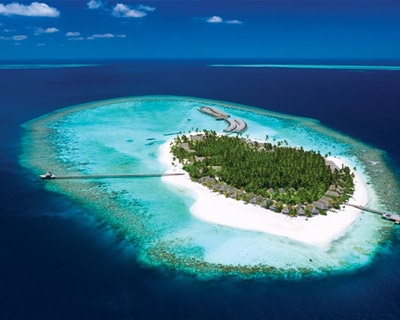 Addu Atoll (Formerly Seenu Atoll)
Addu Atoll, previously also known as Seenu Atoll, is the southernmost atoll of the Maldives. Addu Atoll, together with Fuvahmulah, located 52.3 km north of Addu Atoll, extend the Maldives into the Southern Hemisphere. Addu Atoll is located 541 km from Gan Island south of Malé. Administratively, Addu Atoll is the site of Addu City, one of the two cities of Maldives. Addu City is constituted of the inhabited areas of Addu Atoll, namely the natural islands of Hulhudhoo, Maradhoo, Feydhoo[disambiguation needed], and Hithadhoo. (The districts of Addu City are not according to the natural islands that it comprises). In addition to the areas that are included as a part of Addu City, Addu Atoll has a number of uninhabited islands, including the island of Gan, where Gan International Airport is located.