List of all Maldives Airports and their respective Atolls

Home List of all Maldives Airports and their respective Atolls

Built on natural islands or by using land reclamation, the Maldives have today 18 Airports from which 5 are international and 13 are domestic. 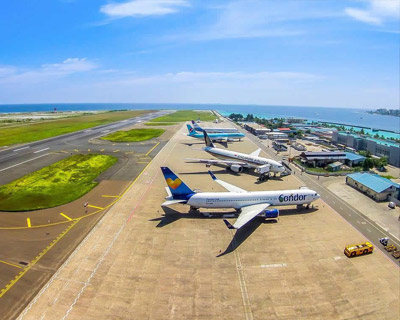 There are 5 international airports in Maldives,Velana and Gan Airports are the most important ones.

Hanimaadhoo, Maamigili and Maafaru Airports are more of semi international airports. They received the International label since they operate flights to their neighbouring countries Sri Lanka and/or India.
The size of their runways doesn’t allow to handle large commercial flights, but this could change in the future.

The following 13 airports are domestic airports only and are scattered all around the Maldives.
Generally small, they do not offer much, but they give a real feeling of being in the tropics, somewhere at the end of the world. A rare sensation now-a-days which makes the experience even more precious.

They have a small runway, a simple terminal with a one or a couple of check-in counters.Initially built on natural islands, more and more domestic airports are developed by using land reclamation. Their number is constantly increasing

The Maldives is well connected with the rest of the world. Several flights from Europe, Middle East and South East Asia operate to Velana International Airport, the main gateway to the Maldives. The highest international traffic is from Colombo, Sri Lanka, various Indian cities and Dubai, while several scheduled and charter flights bring in passengers from all major European capitals, and South East Asian cities.

Once in the Maldives you can travel to any of the domestic and international airports to which several daily flights are operated. Scheduled ferry services also operate from Male’ to most of the atolls.

If you are travelling to a resort, your transfer will most likely be pre-arranged at the time of booking your accommodation. Transfers to resorts around the airport are by speedboat and transfers to resorts and islands further afield are by seaplane.