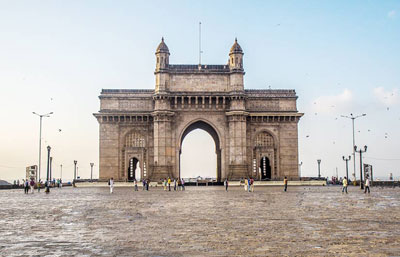 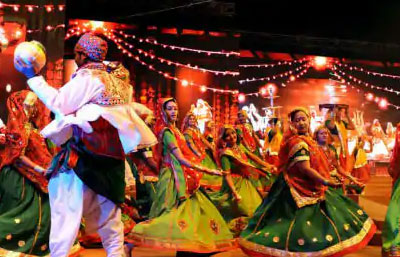 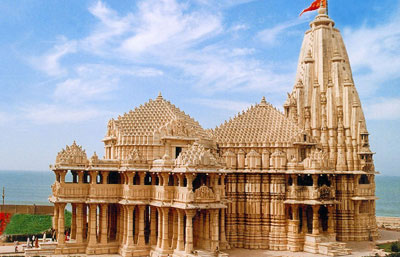 Arrive Mumbai by international flight, after a traditional 'Swagat' (Welcome) our representative would assist you at the airport & transfer to hotel for check-in.

Mumbai, an archipelago of seven islands. Artifacts found that these islands had been inhabited since the Stone Age & documented evidence of human habitation dates back to 250 BC. In the 3rd century BC, the islands formed part of the Maurya Empire. In 1534, Portuguese appropriated islands from king of Gujarat later ceded to Charles II of England in 1661, as dowry for Catherine de Braganza. These islands were in turn leased to the British East India Company in 1668.
Overnight Hotel – Mumbai (B)

Today we take a flight to Ahmedabad. Located on the banks of the River Sabarmati, the city is the administrative centre of Ahmedabad District and was the capital of Gujarat from 1960 to 1970, after which the capital was moved to Gandhinagar. The city is sometimes called Karnavati, a name for an older town that existed in the same location; in colloquial Gujarati, it is commonly called Amdavad. The city was founded in 1411 to serve as the capital of the Sultanate of Gujarat, by its namesake, Sultan Ahmed Shah. Under British rule, a military cantonment was established & the city infrastructure was modernised & expanded.

Later we take a guided tour visiting Mosques.
Jumma Masjid, described by some as the most beautiful mosque in India, is a congregational mosque and was built by the city's founder, Sultan Ahmed Shah in 1423. Built in yellow sandstone, it combines the best of Hindu & Muslim styles of architecture. It stands on 260 pillars supporting 15 domes at varying elevations. The mosque is located in the centre of the old city.

Sidi Syed Mosque, built by Ahmed Shah's slave, Sidi Sayed, is celebrated all over the world for its exquisite stone window tracery - a superb example of delicate carving that transforms stone into filigree.
Two shaking minarets are located at the Siddhi Bashir mosque. They are uniquely designed in a way that when one minaret is shaken the other one shakes too.
Overnight Hotel – Ahmedabad (B)

Today we visit the Hatheesing Jain Temple, Built outside Delhi Gate in 1850 by a rich Jain merchant, the Hatheesing Temple is the best known of Ahmedabad's many ornate Jain temples. Built of pure white marble & profusely decorated with rich carvings, the Hatheesing Temple is dedicated to Dharamnath. Within the city there are many other Jain temples with remarkable carvings in stone & wood. Also visit the Sabarmati Ashram set up by Mahatma Gandhi a simple retreat in 1915. This was his first Satyagraha Ashram & for many it was the nerve centre of India's freedom movement. Hridaya Kunj, the cottage where he lived is preserved as it was in the Mahatma's lifetime. The Gandhi Ashram has a memorial centre, library & a sound & light spectacle to offer its visitors.
Overnight Hotel – Ahmedabad (B)

Today we drive to Jamnagar , built by Maharaja Kumar Shri Ranjit Singhji in the 1920s, when the district was known as Nawanagar. It is well-known for its four marble Jain temples: Vardhman Shah's Temple, Raisi Shah's Temple, Sheth's Temple, & Vasupujya Swami's Temple. All were built between 1574 & 1622. Also known as the Jewel of Kathiawar.
Overnight Hotel – Jamnagar (B)

Today we take same day excursion to Dwarka, The city derives its name from word "Dwar" meaning door in Sanskrit. Dwarka is one of the holiest cities in Hinduism & one of the 4 main dhams. The legendary city of Dwarka in Hindu mythology was the dwelling place of Krishna. It is believed that, due to damage and destruction by the sea, Dwarka has submerged six times and modern Dwarka is the 7th city to be built in the area.

Here we visit Dwarkadheesh, also known as Jagat Mandir, is built on the north bank of the Gomti Creek. The temple dates back to 2,500 years & architecturally constructed on the same plan & system as most of the Hindu sacred edifices of antiquity.

Jagat Mandir or Nij Mandir forms the sanctum of Dwarkadish temple & dates back to 2500 years. Jagat Mandir has its own hall of audience & a conical spire. Main attraction of the Temple is spectacular evening prayers (Aarti). Another temple in Dwarka is temple of Rukmini Devi Temple, small temple is an architectural masterpiece. Rukmini is the most important of Krishna's many wives. The temple walls are decorated with beautiful paintings depicting her pastimes with Krishna. This temple is said to date back to the 12th century.
Overnight Hotel – Jamnagar (B)

We drive to Junagarh, which literally means an ancient fort. The Junagadh town is located at the foothills of the sacred hill of Girnar & occupies a special place in the history of Gujarat. The history of Junagarh is chequered by the rulers of the Mauryans, Kshatrapas, Guptas, Vallabhis, Chudasamas & others. Both political powers & religious influences enriched the culture & created fantastic edifices leaving architectural mark.

Later we visit Uparkot Fort, famous for its virtual inaccessibility. Inside the fort, 14 Rock Edicts of the Emperor Ashoka can be seen inscribed on a great boulder. The inscriptions carry Brahmi script in Pali language and date back to 250 BC. On the same rock are inscriptions in Sanskrit. Damodar Kund, named after Krishna, whose water is said to be sacred due to its property of dissolving bones of dead brought for the immersion. Nearby there is Shri Mahaprabhuji's Baithak.
Overnight Hotel – Junagarh (B)

Today we drive to Sasangir, best known as being the sole home of the pure Asiatic Lions (Panthera leo persica). The Sanctuary, the area is considered to be one of the most important protected areas in Asia due to its supported species.

Established in the year 1965, Today is the sustaining ecosystem of Gir, with its diverse flora & fauna. The forest area of Gir & its lions were declared as "protected" in the early 1900's by the then Nawab of the princely state of Junagadh. This initiative resulted in the conservation of the lions whose population had plummeted to only 15 through slaughter for trophy hunting.


Later we take a Jeep safari to the National Park. It has the distinction of being the only refuge to the last surviving majestic Asiatic Lions (Panthera leo). Apart from the Asiatic Lions, the Park is also home to large number of Panthers, Hyenas, Deer, the world's only 4-horned Antelope, Blue Bull, Wild Boar & the dangerous Marsh Crocodile.

Several machaans (watch towers) & hideaways have been raised near waterholes to allow visitors a closer look at the lions.
Overnight Hotel – Sasangir (B, L, D)

Today before breakfast we again take a Jeep safari to the National Park to explore the jungle & its inhabitas.

Later drive to Somnath Temple, located in the Prabhas Kshetra near Veraval in Saurashtra, on the western coast of Gujarat, India is one of the twelve Jyotirlingas (golden lingas) symbols of the God Shiva. It is mentioned in the Rig Veda. Somnath means 'The Protector of Moon God'. The Somnath Temple is known as 'The Shrine Eternal', as although the temple has been destroyed six times it has been rebuilt every single time. Evening free to visit temples & Aarti.
Overnight Hotel- Somnath (B)

Today we continue the drive to Diu, an island lying off the south coast of Gujarat's Kathiawar peninsula, separated from the mainland by a tidal creek. It is famous for its fortress & Old Portuguese Cathedral. The village of Ghoghla, which lies on the mainland opposite the eastern end of the island, is also part of the union territory.

Later we take a guided tour of Diu, visiting the Battlement of Diu Fort, an expansive & imposing structure, situated on the coast of the island. The fort commands a magnificent view of sea. It was constructed between 1535 -1541 AD after a defence alliance, concluded by the Bahadur Shah, Sultan of Gujarat. The fort is skirted by the sea on the three sides. On the Fort stands a giant structure now housing a Lighthouse. A strange mist shrouds the entire fort. It is more conspicuous during winter nights when fog spreads all around, & the lighthouse gives off a misty light. Later we visit the Wood Panelled St.Paul's & St.Thomas' Churches.
Overnight Hotel - Diu (B)

We drive to Bhavnagar via Palitana, a city and former princely state is a major pilgrimage centre for Jains. The Palitana temples are considered the most sacred pilgrimage place (tirtha) by the Jain community. There are a total of 1250 temples located on the Shetrunjaya hills, exquisitely carved in marble. The main temple on top of the hill is dedicated to 1st Tirthankara lord Adinath (Rishabdeva). No one is allowed to sleep overnight including the priest, because the temple city has been built as an abode for the Gods.
Later continue drive to Bhavnagar , Known as the cultural capital of Saurashtra, the city was named after its ruler & founder Bhav Singhji Gohil. It was a carefully chosen strategic location having potential of maritime trade. It remained a major port, for almost two centuries, trading commodities with Africa, Mozambique, Zanzibar, Singapore & the Persian Gulf.
Overnight Hotel- Bhavnagar (B)

Today we take a guided tour visiting Khodiyar Mata, Situated 4 Km from Sihor, is a famous shrine commemorating the family Goddess of the rulers of the former Bhavnagar State. The deity is held in great reverence and the shrine with 36 pillars and a vast mandap presents a serene sight.
Takhteshwar Temple presents a breathtaking view. Made of pure marble and constructed in the late 19th century, the temple is situated on a hillock near the Takhteshwar railway station between Bhavnagar and Mahuva. The picturesque view from the temple adds to the serenity of the place. Gandhi Smriti, Established with an objective of keeping Gandhian thought alive, is a living monument to Gandhiji. Opened in 1955, the institution hoses a Gandhi picture gallery, museum, Khadi Gramodyog Bhandar and a library. The institution has kept alive Gandhiji's association with Bhavnagar and the States of Saurashtra.

Also visit Velavadar Black Buck Sanctuary, home to the Indian black buck. Velavadar in the Bhal region of Saurashtra, is a unique grassland ecosystem that has attracted fame for the successful conservation of the black bucks the fastest of the Indian antelopes, wolves and the lesser floricans.
Overnight Hotel- Bhavnagar (B)

Today we assist you with your transfer to the airport to board your flight to Mumbai for your onward journey.


Our tour concludes: Caper thanks you for your patronage and looks forward to serving you again in the near future.