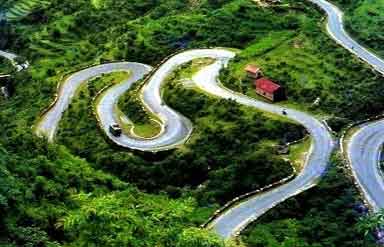 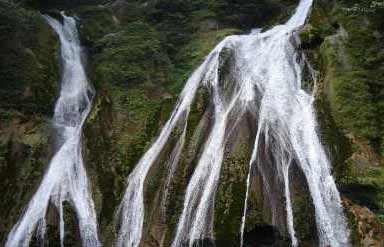 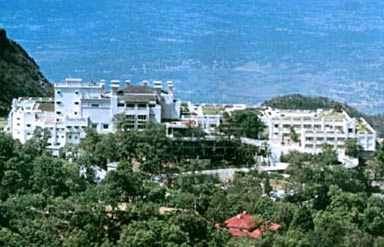 Mussoorie, the charming hill station of India allures every visitor with its natural panorama. Popularly known as the Queen of Hills, the pine covered hill slopes and snow-capped mountains combine perfectly with flora & fauna; thus creating a captivating hill resort. A fabulous honeymoon, a pilgrimage and a popular adventure spot; Mussoorie is another name for abundance. It opens a doorway to Hindu pilgrimage sites like Kedarnath, Badrinath, Gangotri, Yamunotri, Haridwar and Rishikesh which are popular excursions from the city.

It is the second highest peak of Mussoorie which offers a beautiful sight of the Himalayas. This hill got the name Gun hill because during the pre-independence time a gun was mounted on its top which was fired at mid-day to enable people to adjust their watches. Form this hill one can get beautiful panoramic views of the Himalayan ranges namely Bunderpunch, Srikantha, Pithwara and Gangotri group etc. and a bird's eye view of Mussoorie town and Doon Valley. It was once accessible by a steep, narrow bridle path but now it can be reached in just about four minutes by a cable car which was set up in 1970. The 400 meters cable car connects the Mall to Gun Hill and is known for a thrilling experience.

This is a picnic spot having a beautiful garden and an artificial mini lake with boating facilities. The Garden is located about 3 kilometer or 1.86 mile from the Library point and a stone's throw away from the Lal Bahadur Shastri National Administration Academy. This garden is home to a large variety of flora and avifauna which makes it popular among nature-lovers. Around 800 different kinds of flowers blossom here, including Begonia, Dahlias, Pansy and Petunia.

This is the highest point in Mussoorie which is perched over the Lal Tibba. It is accessible by foot. Alternatively, you can take a horse ride to the site. This is an ideal place for nature-lovers to spend their time in the nature's scenic beauty. It is a perfect place in Mussoorie to see the breathtaking glimpse of sunrise and sunset.

It is a beautiful promenade in Mussorie which is a 3 km stretch between Kulri Bazaar near rink Hall and Library Bazaar. It derives its name from a rock formation that resembles the back of a camel when it is seen from a point near the gate of Mussoorie Public School on the road. The entire stretch is lined with thick Deodar trees on both sides which makes it an ideal place for morning and evening walks. This place offers enchanting views of the snow capped mountains bathed in golden sun rays.

It is a beautiful picnic spot situated near the village of Jharipani, about 7-kilometer on the Dehradun Mussoorie road. Jharipani offers beautiful views of the Shivalik ranges. The area around Jharipani falls is lush with wild flowers, shrubs, creepers and plants growing amidst dark mountainous rocks that stand on one side. The other side looks down at the wide expanse of mountains, trees, leveled pieces of mountains where step-farming is practiced and at the Doon Valley further below.

It is located about 7 km from Mussoorie, on the Mussoorie-Dehradun Road. This is a beautiful picnic spot with a small stream running through the site. The stream is full of algae, and hence not suitable for a swim. The main picnic area, however, has a separate pond where you can enjoy a refreshing dip.

The Kempty Falls is the major attraction of Dehradun and Mussoorie. It is located 15 km from Mussoorie on the Yamunotri Road at an altitude of 4500 ft above sea level. The water cascading down from an altitude of 4,500 feet and splitting further into five cascades. The name Kempty is derived from 'Camp-tea' as the Britishers used to organize their tea parties here during the British Raj in India.

It is located at a distance of about six kilometers from Mussoorie, on the Cart Mackenjie Road. This is the ancient temple which is dedicated to Nag Devta. From the temple, one can also get an enchanting view of the Doon valley and Mussoorie town.

It is situated on Mussoorie-Dehradun road about 6 km from Mussoorie. This is a delightful picnic spot famous for a man-made lake which was formed by stopping a mountain stream. The lake offers an enchanting view of Doon Valley and the nearby villages. Boating facility is also available at this place.

This is a famous picnic spot located at a distance of about 3 km on Tehri bypass road. It is covered with a thicket of undulating pine trees and varicolored shrubs which make it a charming destination to enjoy nature at its best. The place is also popular for exotic wildlife like Ghurar, Kankar and Himalayan Peacock.

It is also known as the Park Estate of Sir George Everest which is situated about 6 km from Mussoorie. It is the building and laboratory of the first Surveyor General of India, Sir George Everest. The highest peak in the world, Mount Everest, is named after him. The house is situated in a picturesque place from where one can catch the panoramic views of Doon Valley on one side and views of Yamuna Valley and snow bound Himalayan ranges on the other.

This temple is located 9 km to the west of Mussoorie at an altitude of 2104 meters above sea level. It is situated on the top of the Benog Hill with an enshrined idol of Mata Durga in it. The temple is surrounded by thick forests which offers a panoramic view of the Himalayan peaks, Doon valley and Yamuna valley.

Built in 1838 by a British Major, this Bungalow is among the First Four buildings of Mussoorie. The bungalow has now been converted into a hotel called Clouds End, which is situated at the extreme west of Mussoorie Hill, 8 km from the Library. The resort is surrounded by thick forest which offers a wide variety of flora and fauna besides a panoramic view of snow clad Himalaya and the Yamuna River. The is the most ideally suited resort for foreigners and honeymoon couples.

It is an interesting trek located 55 km from Mussoorie which offers a good trekking option during winter when most of the high altitude treks become inaccessible due to heavy snow in the higher reaches of the Himalayas. This trek offers panoramic views of the high Himalayan ranges. There are plenty of temples and typical Garhwali villages en route Naga Tibba.

It is located 25 Km away on Mussoorie-Tehri Road. It is known for deodar forests and scenic landscapes.

Situated at an altitude of 2,903 meters and about 40 km from Mussoorie, Surkhanda Devi Temple is an important Shakti shrine. The temple is dedicated to the Goddess Durga and can be reached by trekking as it is around two kilometers from Kaddukhal via Dhanaulti. The Ganga Dussehra Fair is held here every year around in May-June which attracts thousands of devotees to this place.

When to visit Mussoorie

Mussoorie is a hill station which has pleasant climate around the year. It is a very cool place with greenery at its full bloom during September to November. The best season to visit Mussoorie is between April to June and again during September to November. It is better to avoid this place during monsoons as during this season due to heavy rainfall the roads to Mussoorie are in bad shape. Same thing applies for the winter when roads are blocked due to snowfall.

How to Reach Mussoorie

By Rail: The nearest railhead is located in Dehradun, located 34 km from Mussoorie. It connects Dehradun to important cities like Delhi, Bombay, Amritsar, Varanasi and Lucknow. Shatabdi Express is the most convenient option, if you plan your trip from Delhi to Dehradun by train.

By Road: Well maintained roads connect Mussoorie to all the major cities nearby. Delhi is 269 km from Mussoorie, and one can easily drive via Meerut, Roorkie, Chuttmalpur, and Dehradun to reach Mussoorie from Delhi. Various buses of 'Uttaranchal State Transport' shuttle between Delhi and Mussoorie.