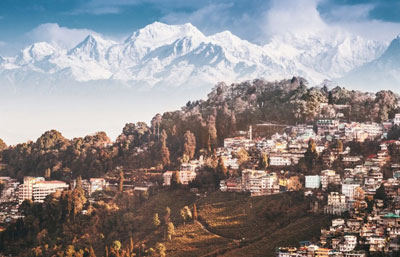 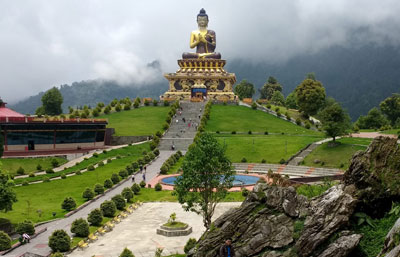 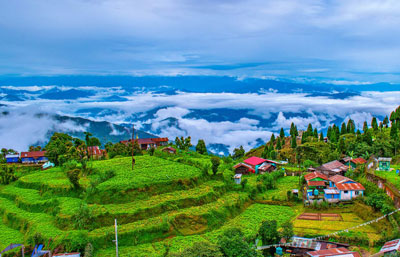 Arrive Bagdogara, after traditional 'Swagat' (Welcome) Caper's representative would assist you at airport & drive to Darjeeling, Queen of India's hill stations. Its setting is one of incomparable beauty. A Victorian town of old world charm 'discovered' by the British. It is surrounded by fragrant tea gardens which seem to flow over the layered slopes like emerald swells on a rough sea.
Overnight Hotel - Darjeeling (B, D)

Today we drive to Kalimpong, an incredible stunning backdrop of towering snow capped peaks. This exotic town of beautiful people, mystical & enchanting, with a rare ethnic blend of hill people. It also houses several Buddhist monasteries which hold a number of rare Tibetan Buddhist scriptures. It was ruled by Bhutan for 155 years & was annexed by the British only in 1865, after which it flourished as a centre of wool trade with Tibet. Here Buddhism rubs shoulders with Hinduism & Christianity. Gumpas, unusual churches, temples & missionaries coexist in a jovial society.

Later we visit Thongsa Gompa also known as the Bhutanese Monastery. It is the oldest monastery in Kalimpong & was founded in the year 1692. Though the old structure was destroyed by the Gorkhas, it was rebuilt on the same site. Next visit the Zong Dog Palri Fo-Brang Gompa, which is on the Durpin hill & is famous for the Tibetan wall paintings. It also has a religious debating society along with a school of Tibetan medicine.

We also visit Tharpa Choeling Monastery founded in 1937 & belongs to the Gelugpa (yellow hat) sect of Tibetan monastery. This Monastery houses many old scriptures & literary works. Next Dr Graham's Home, mission school was founded by Scottish missionary Dr. John Anderson Graham in 1900. The purpose of the school was to educate children of the tea garden workers & poor labourers. We also visit few nurseries around town.
Overnight Hotel - Kalimpong (B, D)

we drive to Bagdogara to take a fight for Kolkata. This is a wonderful drive & initially you follow the turbulent Teesta. Upon Arrival in Delhi transfer to International Airport for onward destination.