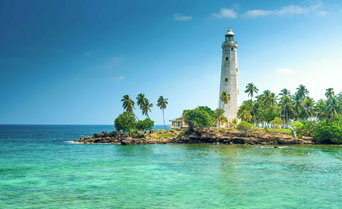 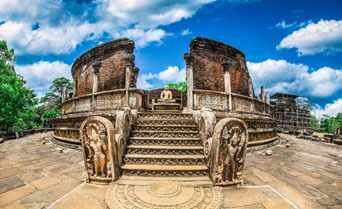 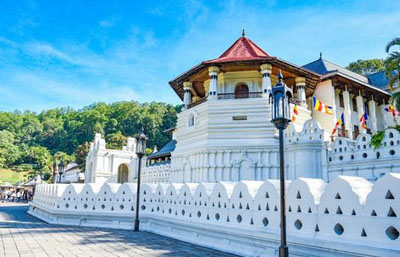 Meet and assist on arrival at Airport by Representative, Transfer to the Hotel.

The Negombo town boasts several buildings dating back to the days of Dutch and Portuguese presence in the country. The beautiful sea shores and the ocean are dotted with catamarans. The Negombo lagoon is famous for its harvest of lobsters, crabs and prawns. The seafood auctions on the beach are a must-see. Other highlights of the city is the Dutch Fort and the historic Catholic Church.

Breakfast at Club Hotel Dolphin
Transfer from Negombo to Anuradhapura
Anuradhapura holds the distinction of being the third capital (after Tambapanni and Upatissa Nuwara) and the greatest city in the history of Sri Lanka. This glorious city is also one of the oldest continuously inhabited cities in the world and one of the eight World Heritage Sites of Sri Lanka. The Sri Maha Bodhi (Sacred Bo Tree), which is over 2200 years old, was brought here as a sapling (from the tree under which Prince Siddhartha attained enlightenment). This tree is the oldest historically documented tree in the world. To add to this glory, the famous dagoba in Sri Lanka, Ruwanweliseya (2nd century BC) and The Brazen Palace too are found in Anuradhapura. Other major attractions include the Samadhi Buddha statue and the Isurumuniya Rock Temple (3rd Century BC), which is famous for its rock carvings.
Transfer from Anuradhapura to Dambulla

Breakfast at Hotel
Transfer from Dambulla to Sigiriya
Sri Lanka's most popular historic site, Sigiriya is the 5th century rock citadel of King Kasyapa. This 200 meters citadel was home to his palace on top of the rock and derives its name as it appears to resemble the outline of a lion from distance. King Kasyapa built his palace and decorated its walls with colorful frescoes which can even be seen today. These frescoes, along with India?s Ajantha cave frescoes are world renowned for lasting through the ages and their awe-inspiring beauty. When you climb along the side of the rock, about halfway up, you will encounter a gateway that although in ruins, resembles a gigantic lions paw. Today, Sigiriya is a UNESCO listed World Heritage Site and remains as one of the best examples of ancient urban planning in Sri Lanka.

Transfer from Sigiriya to Polonnaruwa

Polonnaruwa became capital of Sir Lanka following the decline of Anuradhapura. It was declared a capital by King Vijayabahu the 1st who defeated the Chola invaders in 1070. Today, the ancient city of Polonnaruwa is a World Heritage Site. The golden age of this glorious city was under the reign of King Parakramabahu the 1st who oversaw the construction of one of the greatest irrigation systems the country has seen, the Parakrama Samudhraya, which covers an area of 6,000 acres. The ruins of the Royal Palace and various buildings and structures can be seen even today. Other highlight of this city is the Gal Viharaya which has 3 splendid statues of the Buddha in 'Upright', 'Sedentary' and 'Recumbent' postures carved out of rock, the Audience Hall, the Lotus Bath, the statue of King Parakramabahu, the former Temple of Tooth Relic, Shivan Temple, Lankathilake, Watadage, Galpotha, and Kiri Viharaya.

Transfer from Polonnaruwa to Dambulla

Transfer from Dambulla to Matale

Matale, known for its welcoming climate is world famous for its spice gardens. Here one may experience the intricate processes that result in Sri Lanka producing some of the best spices in the world. What?s more, a cookery demonstration too will be held allowing visitors to learn to prepare traditional curries using local spices.

Transfer from Matale to Kandy

The World Heritage Site, Kandy, was the last capital of the Sri Lankan Kings, before the country was brought under British rule in 1815. Famous for its rich heritage and splendour, this magnificent city was last ruled by Sri Wickramarajasinghe. The Temple of the Tooth Relic is the most significant highlight of the city along with the Kandy lake, the town and other attractions. Visit the Kandy Town and Bazaar, the arts & crafts centre and a gem museum and a lapidary. In the evening, visit the Temple of the Sacred Tooth Relic and thereafter, witness a cultural show featuring traditional Sri Lankan dance.

Breakfast at Earl'S Regent Hotel
The World Heritage Site, Kandy, was the last capital of the Sri Lankan Kings, before the country was brought under British rule in 1815. Famous for its rich heritage and splendour, this magnificent city was last ruled by Sri Wickramarajasinghe. The Temple of the Tooth Relic is the most significant highlight of the city along with the Kandy lake, the town and other attractions. Visit the Kandy Town and Bazaar, the arts & crafts centre and a gem museum and a lapidary. In the evening, visit the Temple of the Sacred Tooth Relic and thereafter, witness a cultural show featuring traditional Sri Lankan dance.
Transfer from Kandy to Peradeniya
The Royal Botanical Gardens of Peradeniya covers approximately 147 acres and attracts over 2 million visitors annually. It is home to over 4,000 species of plants including some of the most beautiful orchids you?ll ever see. The origins of these magnificent gardens date back to the time of King Wickramabahu the 3rd in 1371. Besides the plethora of plants, the famous Avenue of Palms and the Cannonball Tree planted by King George the 5th of the United Kingdom are key highlights.
Transfer from Peradeniya to Kandy

Breakfast at Earl'S Regent Hotel
Transfer from Kandy to Kataragama

Transfer from Kataragama to Yala

Yala National Park is undoubtedly the largest and most popular in Sri Lanka. It consists of five blocks, all of which are at present open to the public. Block 1, Ruhuna is the most visited of the five. Visitors can expect to see wild elephants, wild boars, wild buffaloes, leopards, bears, deer and crocodiles. Large flocks of migratory and indigenous birds are also found here.

Transfer from Yala to Beruwala

Overnight Stay at The Palms

Transfer from Beruwala to Galle
Galle is located in the south-western part of Sri Lanka and is an important city in the region. The city remains the best example of a fortified city built by the Portuguese during their period in the country. The Galle Fort, today, is a world heritage site and the most important landmark in the city. The Dutch Museum and the Dutch Church are two other significant attractions. Galle has also made a name for itself for its intricate lace and ebony carvings.
Transfer from Galle to Hikkaduwa
Hikkaduwa is known for its fantastic beach. You will find the famed coral gardens when you take a trip on a glass-bottom boat and explore. Hikkaduwa, as of recently, has become known as a beach party destination and is very popular amongst tourists and locals alike
Transfer from Hikkaduwa to Balapitiya
Balapitiya is the nearest town to the Maduganga River which is famous for its mangroves and endemic flora and fauna. This little town is renowned for its Ceylon Cinnamon and fishing.
Transfer from Balapitiya to Kosgoda
Kosgoda is a small village located in the west coast of Sri Lanka. It is most popular for its sea turtle hatcheries, operated by the Wildlife Protection Society of Sri Lanka. Here you will feast your eyes upon the amazing site of many species of turtles, especially the endangered hawksbill, laying their eggs along the beaches. The many hatcheries that are operated locally provide a safe haven for these sea turtles. You may visit these hatcheries to have a look at many huge tanks filled with new born turtles who, once grown, are released to the sea.

Transfer from Kosgoda to Colombo

Colombo is the trade capital of Sri Lanka, and is a city that has undergone rapid changes. While most old buildings have been replaced by new apartments and office buildings, some parts of the city yet retains its old charm. The 100 year old clock tower built by the British and some colonial buildings remain examples. The Independence Square, Nelum Pokuna, Pettah Bazaar and BMICH are some of the main highlights of the city. Colombo also provides ample entertainment in terms of an active night life as well as a shopping experience you'd never forget.

Transfer from Colombo to Airport for departure. .